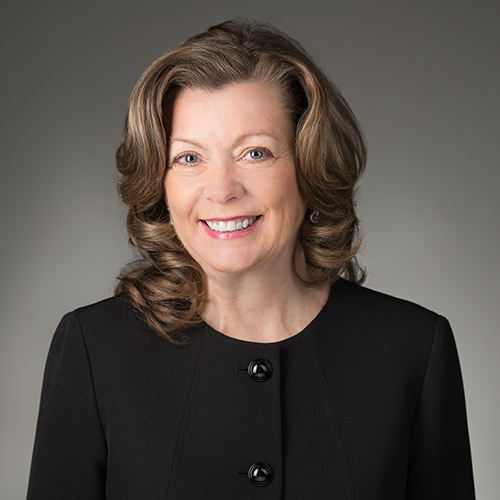 Marsha Kelliher, J.D., became the 24th president of Simpson College on March 31, 2020. She is the first woman to serve as president in the college's 160-year history. Kelliher came to Simpson College from Walsh College in Troy, Michigan, where she served as President & CEO.

Kelliher earned a LL.M. in Labor and Employment Law from the University of San Diego and a J.D. from South Texas College of Law. Her bachelor's degree is from Indiana University. Kelliher began her career in the consulting department of Peat, Marwick, Mitchell, & Co. in 1982. While working full time she enrolled in law school, attending most of her classes on nights and weekends. She is licensed and has practiced law in both Texas and California. In 2013, Kelliher was admitted into the prestigious National Academy of Arbitrators.

“President Kelliher is a passionate leader who has continuously demonstrated the ability to effectively lead dynamic institutions. With President Kelliher's leadership, Simpson students, faculty, staff and our alumni will continue our great tradition of providing an exceptional learning environment devoted to student success and inclusiveness. Her experience, vision and dedication will ensure Simpson College continues to set the standard for liberal arts education in Iowa and beyond."

She joined the ranks of academia in 1994 at St. Edward’s University and in 1998 was named the Interim Dean of the university’s MBA program. From 2000-2004 she served as the Dean of the Graduate School of Management and from 2004-2013 she oversaw the university’s graduate and undergraduate business programs. Under her leadership, six new domestic majors and six new domestic graduate programs were launched.

During her tenure as Dean of the Sigmund Weis School of Business at Susquehanna University, Kelliher led the school’s reaffirmation for the Association to Advance Collegiate Schools of Business (AACSB) accreditation, launched a Women’s Leadership Symposium and oversaw the creation of four new majors.

Kelliher supports her profession through committee work, conference presentations, and serving on AACSB peer-review teams. She is also active in the community, serving on boards and committees for governmental, for-profit and non-profit organizations. She received a Peacemaker Award from the Austin Dispute Resolution Center and was named a Women of Influence by the Austin Business Journal in 2011. In 2004, she was nominated for an Austin Business Journal Profile in Power Award and was a Leadership Texas graduate. In the fall of 2002, she was named the YWCA Woman of the Year in Education.